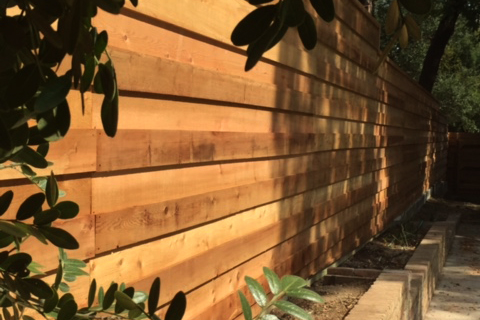 “My neighbors and I hired Ambassadors Fence Company to develop a plan for our extensive wood fencing project. The fence needed was to run through an area comprised of several steep grades, as well as multiple areas which were going to required earth retaining walls. The overall project was large since it involved 13 properties, our two homes and 11 neighbors and running approximately 5000ft in length. We really wanted something natural and beautiful wood fencing was the unified choice.

I am admittedly a detail-oriented lady and I had a lot of questions and comments before, during, and also after the job was successfully completed. They even gave us information on how to maintain the fencing and what to look for that could lead to problems. Philip never gave me grief about my numerous inquiries and always gave me plenty of feedback in a timely manner. From beginning to the end, Philip and his crew were extremely professional.

Before hiring Philip I had read a yelp post and had some concerns about a not so good review. I wouldn’t want to discredit the experience of the other individual, however, I can say that my own experience with Ambassadors Fence Company was superb and they exceeded my expectations.

Philip and his crew did not cut corners to minimize their cost, every material used in the entire project was top quality. The post holes were deep and the concrete footings were more than sufficient to support the posts. The fence is strong and beautiful.

A thorough picking up was done by the team at the end of each day and they ensured the place was very clean. Though it was a major construction project, only a few plants got damaged in the process. The overall destruction was very minimal and I was very happy they took such care with the surrounding landscape and did so little damage.

I would highly recommend Ambassadors Fence Company without any reservations. It was a complete delight to work with Philip and I do plan to refer him to any of my friends who might have fencing construction needs.”

If you’re looking for a local fencing company you can trust,